The observatory is usually open several nights per week for access by astronomy students fulfilling course assignments. In addition, it is open on clear Friday evenings to the general public from 7 – 10 pm during regular Drew semesters. Student groups may schedule a visit in advance. For specific schedule information, please email Dr. Robert Murawski or call (973) 408-3834. To inquire about an opening on a given Friday evening, you may call the observatory directly at (973) 408-3500.

The current telescope is a research-grade 0.41m (16″) instrument with f/8 Ritchey-Chretien optics obtained from DFM Engineering in Longmont, Colorado. It was the result of a successful 1992 NSF ILI grant, and saw first light in the Spring of 1993.

The telescope is computer controlled from a computer located in a Hall of Science warm room. This computer is accessible from the dome, and can also be linked to a separate dome PC running The Sky software. This program produces a computer skymap for any time and date, and by clicking on a particular celestial object, the telescope will slew to view that object. Readout information for the dome position is also fed to the computer which then ensures that the dome opening will automatically rotate in front of the telescope aperture.

A Santa Barbara Instrument Group (SBIG) ST-1001E large format, megapixel CCD camera is mounted to the telescope via a custom DFM Filter Wheel (FW-82) module containing six rotatable filters and eyepiece. The ST-1001E camera uses a Kodak KAF-1001E “Blue-Plus” Enhanced CCD chip with an array of 1024 x 1024 pixels, 24 micron-square pixels, a 180,000 electron full-well capacity, and a typical dark current of less than 1e-/pixel/second at -25 C. The camera head is thermoelectrically cooled and regulated to operate at a temperature of -40 C. The camera is controlled via CCDSoft software on the dome computer. Mounted on the telescope, images of approximately 25 x 25 minutes of arc are possible. Images acquired by the dome computer are transferred via a local area network to a separate image analysis computer in the warm room. Mira AP image processing software is used.

The modern astronomy era at Drew began in 1968 with the acquisition of a Celestron 10″ Schmidt-Cassegrain telescope and one Questar 3.5″ telescope, both funded from an NSF curriculum improvement grant. An observing platform was constructed on the roof of the Hall of Science, and the introductory astronomy course was launched using the two telescopes for observing assignments. It was quickly obvious that an observatory building to house the equipment was necessary. In the summer of 1973 a 16′ dome from Ash-Dome of Illinois was constructed on a concrete pad poured on the roof of the Hall of Science. An observing deck of concrete pavers surrounds the dome, and over the years an additional three Questars have been purchased to use with pedestals on this deck.

The year 1993 brought a complete upgrade to the observatory with the acquisition of a DFM 16″ research-grade telescope, a total redesign of the dome interior, and computer automation of the telescope and dome operation. Parallel controls now exist for telescope operation in the dome and at an interior warm room in the Hall of Science.

The observatory serves both introductory classes in astronomy with required observatory assignments, and the physics major in general as an additional source for student independent study/research opportunities. It is also open to the Drew campus each week for general observing sessions.

Over the years the observatory has brought many a celestial event to the eyes of the Drew and surrounding communities. These include the solar transits of Mercury in 1970 and 1972, the solar transit of Venus in 2004, numerous solar and lunar eclipses, meteor showers, and the many comets including Kohoutek and Halley, right up to the Shoemaker-Levy impact on Jupiter, Hyakutake, and Hale-Bopp.

Welcome! This is designed as a short tutorial on using the Questar telescopes located at the Drew University observatory. It is important that you go through the steps from beginning to end as the instructions are sequential and you will miss valuable information by skipping around. Once you have been through the directions from start to finish you can skip from topic to topic to review if you wish. You may also find it helpful to print out the directions. The labeled diagram will be especially helpful to have on hand as you read the directions, and for when you arrive at the observatory to use the scope.

Thank you and here’s wishing you “good seeing”! The above picture shows all of the important parts of the Questar 3 1/2-inch telescope. Familiarize yourself with these parts. It may serve you well to print out the image and refer to it as you go through the rest of the directions. The controls with which you will need to become familiar are;

Normally you will not need to make adjustments to anything other than those knobs listed above. You will also need to know the location of the declination circle and the right ascension circle with its plastic index mark. You will need to know how to read these in order to point the telescope at any given set of celestial coordinates. When you arrive on the roof you will find that the Questar has already been set-up for you on wooden desk-like pedestals. All necessary alignment of the telescope has already been done and the telescope is now “Ready for viewing”. The above image shows the telescope with its lens cover removed and the correcting lens exposed. You should NEVER under any circumstances touch or attempt to clean the correcting lens (or any other lens in the Questar, including the eyepiece). The optics in the Questar are of very high quality and even the smallest scratch or smudge of oil can ruin your evening of star gazing and possibly permanently damage the telescope. To adjust the right ascension (R.A.) of the telescope, you use the knob located at the front of the base. This knob should turn smoothly and easily, providing a continuous motion of the scope about the R.A. axis. The Questar is built so that the motor drive can be left on and adjustments made by hand at the same time without causing damage to the drive. When you stop turning the knob, the motor will take over and continuously move the R.A. at the rate of the Earth’s rotation. To see the effect of the motor you can turn it off by using the line switch. The object in the scope’s field of view will soon drift out of view. Don’t forget to turn the motor back on again, and don’t leave it off too long.

Notice the numbered ring on the base. It is marked in both degrees and in hours of angle, hence the name “hour angle” (same as right ascension). This ring is free to turn and can be set to the known R.A. of a star on which the scope is set. If the motor is then left running for the rest of the night, you can locate any star in the sky if you know its R.A. (and its declination which will be discussed soon). The process of “setting” this ring is part the set-up procedure which is done for you (along with the earlier mentioned polar alignment). For this reason it is important that you not adjust the ring yourself unless instructed to do so. We have covered how to adjust the right ascension axis already. The other axis which can be adjusted is the declination (dec.) axis. While the R.A. axis runs down through the center of the base and is aligned with the north celestial pole, the declination axis is perpendicular to this and runs straight across the barrel of the scope through the word “QUESTAR” in the above image. The dec. axis runs parallel to the equator. This orientation, along with the polar orientation of the R.A. axis, gives us the name of this type of mount – Polar Equatorial.

All of the knobs should move freely and smoothly. If they do not they are either locked in place or are binding and should be checked. Under no circumstance should you need to apply more than a minimal amount of force to these knobs. Forcing a knob which refuses to move could cause serious permanent damage to the precise and delicate works within the telescope.

Although the Questar has no finder scope, it does have a functional equivalent to one. To use it you set the two knobs near the eyepiece to their outside positions as pictured in the left image above.

Once you have found and centered an object, and adjusted the eyepiece, you are ready to move to higher magnification. This is accomplished by using the main mirror of the telescope itself. To do this you rotate the lever on the right to its vertical position as pictured in the central image above. Leave the lever on the left as is. This rotates a prism into position between the eyepiece and the main body of the scope. 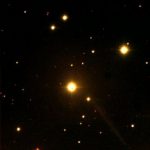 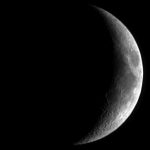 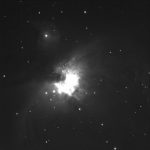 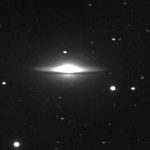 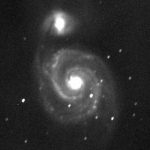