It was Martin Luther King Day when he asked me-

“Would you pastor a Church?” 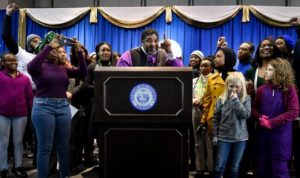 Rev. William J. Barber addresses the audience after calling all students to the stage at the end of his address at the Martin Luther King Jr. 30th Commemorative Convocation TSU’s Gentry Center Monday, Jan. 21, 2019, in Nashville, Tenn.

The question wafted in the air

with the scents of americanos and espressos

as I thought about what it meant.

the words of Rev. William Barber burrowed in my ears-

“You don’t celebrate martyrs, you join them!”[1]

And so, it seemed only appropriate when I responded-

“Over my dead body.”

Did I say that out loud?

Half joking, half truth-telling,

What is a pastor to do

when the church loves the tombs of the prophets,

but not the prophets themselves?[2]

when the church comes to the altar

on which communion is served,

the backs of police cars,

the insides of prison cells,

the lawns of old, white men with trigger happy hands,

or the sidewalks outside of bodegas?

What is the pastor to do

when the church loves to sing of saints,

who are the same people

they burned alive only years before?

Or when martyrdom is only “in” when

engraved in gold and silver,

draping from necks and dangling from ears, 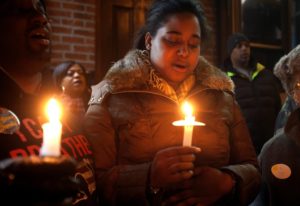 Erica Garner at a vigil for her father, Eric Garner, at the site of his death in Staten Island. Credit: Carlo Allegri/Reuters

or on the sides of vigil candles,

on the doorstep or the church front

or into the alleyway-

You know the one!

The one the congregation complains

smells of urine from all those people

who they thought by now

would be back on their feet

because poverty should have a time limit

and “perhaps they really are just not trying hard enough.”

What is the pastor to do

when the church believes that peacekeeping is

“not indifference, per say, but just keeping the peace,

you know, because we can’t get too political!”

in cells on imaginary borders-

which are still not as cold

who are in the office on Monday

and in the pews on Sunday,

praying to God for a pro-life nation,

just not those lives.

Reverend took a sip from his cup,

of what I imagine was milk with a splash of coffee,

“What are you so afraid of, anyway?”

that I feared the cost.

another church program without progress,

another meeting without mobilizing with the marginalized,

another discussion about the homeless without dwelling with them,

another retreat about holiness without an advance on wholeness of

bodies- male, female or somewhere in between

minds- cloudy or clear, but conscientious

and spirits- all lead by One.

But still the question-

“Would you pastor a church, or not?”

Well, if I could-

I would preach the best way I know how-

grasping onto hands in hospital rooms,

and sermonizing through tears and poems.

I would sing the hymns the best way I know how-

out of key, but in tune with the cries

microphones on high to remind those in power 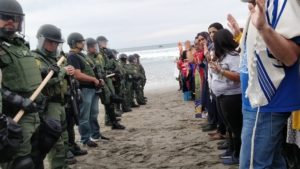 Clergy arrested at the US/Mexico border near San Diego

that they won’t be in power forever,

for those that that are rich

have already received their reward.[3]

I would commune the best way I know how,

with my body and blood,

shielding the ones with guns to their heads

with knives to their throats

with prods to their backs-

so that another mother might not lose her child,

And still the question –

“Would you pastor a church?”

(Could he wait for my answer?!)

Did he mean the building? Or the people?

I cannot be the pastor

who makes sure the pipes don’t freeze,

the sermons stay short and

I cannot be the pastor

who is more busy fighting about

the contemporary music being too loud

instead of fighting for

“Over my dead body.” 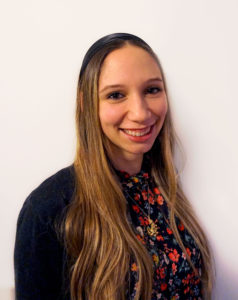 Janine Carambot Santoro is an Associate Chaplain at St. Luke’s University Hospital and a Library Technician at Bethlehem Area Public Library, in Bethlehem, PA. Janine received her B.A. in English and Psychology from Rutgers University (NJ) and her M.Div from Drew Theological School (NJ). Her recent research interests include public theology, Christian ethics, and pedagogies of healing. She currently enjoys reading, writing, traveling, and creating curriculum and workshops for sacred, (w)holistic work to be done in secular places.