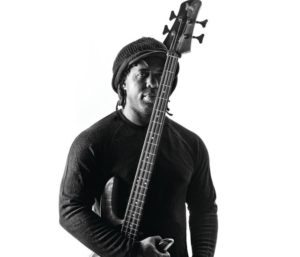 It is a worthwhile question to ask – “How did you get five time Grammy Award winning Victor Wooten to teach an entire day at Drew Theological Seminary, then do a concert?”  Our day of teaching and conversation with Victor Wooten has everything to do with his graciousness and accessibility. Victor is a humble and kind soul.

I knew when we started the Social Justice Leadership Project (SJLP) that we would benefit by partnering with prominent artists. I also knew I did not personally know anyone who traveled in these rarified circles. While at a meeting at Wabash Center (Crawfordsville, IN), I described the work of the SJLP to my colleague and friend Paul Myhre.  Paul is an amateur bass player and lover of jazz. I asked if he had anyone to recommend who understands their artistry as a vehicle for social good.  He said the perfect artist would be jazz musician, Victor Wooten. Paul said that what distinguished Wooten, for our purposes, was his book The Music Lesson: A Spiritual Search For Growth Through Music. I was intrigued.  I said, “Ok, but how would we get him?  I can’t just cold-call Victor Wooten.” Paul said, “Victor is on Facebook!” Then he simply reached out to him.  In less than five minutes, Victor replied to Paul and provided his manager’s name and contact information. I called manager Danette Albetta and the rest is history!

On March 20, Victor Wooten re-energized and re-inspirited our Drew University community.  The Social Justice Leadership Project is designed to create partnerships and collaborations between the Drew Theological community and the wider world of artists who understand their work to be the raising of consciousness, social change, and spiritual renewal. Wooten’s presence among us as an internationally acclaimed jazz musician, author, and master teacher was a day of joy.

The day began with brunch with the Theological School faculty. In preparation for our day with Victor Wooten, the faculty read and assigned many courses to read The Music Lesson, published in 2006.  The book is a fictional account of how Victor learned to play the bass – better.  While talking with our faculty at brunch, Victor said about writing the book, “I wanted to write a book that would allow me talk about my particular approach to music theory and freedom without having then to defend my approach. It took me a long time to figure out the way to write it was as fiction. Since it is fiction, people read my story, enjoy the characters and get my meaning.  If they do not like the story, they do not attack my music theory because it is a story.” Several faculty persons reported to Victor how much our seminary students resonated with his book. Students, even those who know little about music, were strengthened by the liberation theology and life lessons woven into the book. Music as spiritual practice and that which summons spiritual encounters is an on-going theme woven into the book. 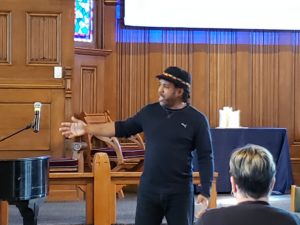 The first of two classes Victor taught after brunch was an undergraduate Music Theory class.  He talked with the students about the meaning of the musical term “key” and explained techniques for better, more agility in understanding key and key changes. The second class of the day was Mark Miller’s Musics of the World course. Victor delved deeply into his book, answered questions about such things as the meaning of mistake making, what it means to hear music all the time, and how he became such an accomplished musician.  A highlight of the session was Victor’s conversation with Tiffani Wheatlley, a first year student who said her sons were taking drum lessons and she wanted to learn to play. Victor brought her to the drums. With a few instructions and coaching, Tiffani played along with Victor Wooten and Mark Miller – and it sounded great!

The evening concert was magical and embodied the SJLP’s emphasis upon collaboration and stretched us to improvisation. Mark Miller played the opening number on piano, then Victor – now at home in our community – joined in. Wooten continued wowing the crowd with both jazz, blues, and gospel pieces.  After an hour or so of performing, Victor announced “a friend is joining me on stage.” That friend was faculty member Elias Ortega-Aponte, who accompanied Wooten on the Cajón. The next faculty person to join Wooten on stage was me!  At some point in our day-long conversation, Victor asked me if I played an instrument.  I have been asked this question hardly ever in my life. My answer is one that usually is unsatisfying to the asking person because I play the didjeridoo – and few people know what that is. When I responded to Victor – he of course knew what it was and instructed me that I was going to play with him in the concert that night. OMG!  During sound check, Victor listened to me play, announced my didjeridoo was in the “D” key and asked what number we should play together. I looked at Mark.  He said “Wade in the Water.”  Victor said – “Good, we’ll do that.”  When we finished playing the piece during the concert the audience erupted!  Just imagine – the very first time I play my didjeridoo in concert and it is with Victor Wooten! 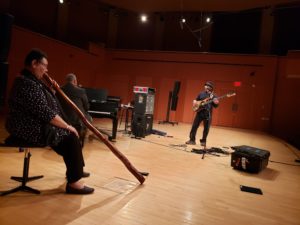 During the afternoon sound check in the concert hall of the Dorothy Young Arts Center, Victor asked Mark if he had ever put the two songs “Halleluiah” and “Amazing Grace” into the same arrangement.  On the spot, the two improvisational geniuses conspired to create a dramatic finale which would need a soloist and audience participation. Brandon Fox, Theological School student, was called and he eagerly agreed to sing.  The piece, when performed, was magnificent. The audience, rising to their feet to sing along with the moving and soulful rendition, cheered wildly at the end.

The day of teaching and performing ended in typical gracious Wooten style. Victor lingered more than an hour after the concert signing books and CDs, taking pictures and talking with students, neighbors, and fans. Victor, Danette and I were the last persons to leave the lobby – what a day!

The work of collaboration and partnership by SJLP is opening doors to new relationships with persons, like Victor Wooten, who are not aware of theological education and the common mission we share. The SJLP is so proud to call Victor Wooten a partner and friend in the work for social change and freedom. 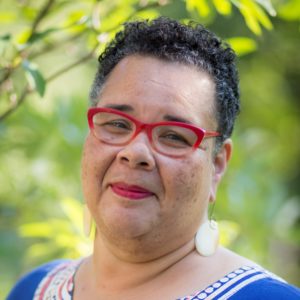 Nancy Lynne Westfield, Ph.D. writes about the religious, educational and spiritual experiences of African-American people, especially women. She is a womanist with a vocational passion for teaching, and an ordained Deacon in the United Methodist Church. This informs her work as Professor of Religious Education and Director of the Forum for Social Justice at Drew University Theological School, New Jersey. Her students say that her courses are creative, intense and strangely fun. Nancy’s first book was a children’s book entitled All Quite Beautiful: Living in a Multicultural Society. Her published dissertation is entitled Dear Sisters: A Womanist Practice of Hospitality. Her books written in collaboration include: Being Black/Teaching Black: Politics and Pedagogy in Religious Studies and Black Church Studies: An Introduction. She is currently working on two books: one about racial identity politics and anti-racist consciousness, and a collaborative project about the mystical experiences of African American people. For more check out: https://lynnewestfield.com or follow her on Twitter @LynneWestfield.