“Motherless Child (Revisited)” defines my Postmodern Spiritual* concept at this early stage of development. The plan was to catch on to the tiny, seemingly insignificant glimmer of hope in this Negro Spiritual, and build empowerment and resolution. As the words read as, “Sometimes, I feel like a motherless child.”, the “sometimes” implies that there are times when hope is evident and you can encourage yourself. By adding new lyrics, a melodic hook as well as exuberant sax solos and a backbeat, the point was to transform a song of despair at the hands of oppression into one declaring freedom of the mind, body, and soul.

*The Postmodern Spiritual – synthesizing jazz language, black church music, soul music, a re-imagining of the Negro Spiritual in a contemporary context, An artistic form purposed to bring the hope and resilience of the freedom song into the 21st century. 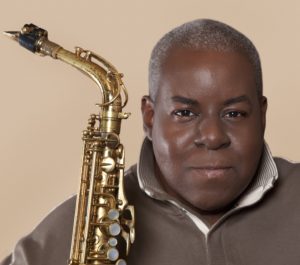 Tyrone Birkett is a saxophonist, composer, producer partnering art and social consciousness as an “artist for humanity”. Focused on creating music that affirms the good and the beautiful, in spite of what we see in our world. As the conceptualist, composer and musical director of the band Tyrone Birkett | Emancipation, he has created Postmodern Spirituals, a project that synthesizes jazz language, black church music, soul music & Negro spirituals.
Tyrone has brought curative and empowering art to The Apollo Theater, WNYC/Greene Space, Blue Note Jazz Club, Lehman and York College Performing Art Centers. He has also been awarded grants & commissions from the Puffin Foundation, Drew University, Bronx Council of the Arts and Flushing Town Hall.