This article is the first in a series of profiles of Korean Women by Dr. Angela Son.

I created the term comfort girls-women to replace the widely used term “comfort women,” often placed inside quotations. This term has three significant aspects: (1) the italics signify that the word comfort has a different meaning—sexual slavery—than its usual meaning in the term “comfort women” of entertaining and providing pleasure to men; (2) the addition of the word girl underscores the young age of the victims who were forced into sexual slavery; and (3) the word woman reflects the long period—about three quarters of a century—they endured without a satisfactory resolution of their situation.  Currently, Korean comfort girls-women are referred to in Korean as halmoni, which means ‘grandmother’ and is a general term for elderly women in Korea.  Calling Korean comfort girls-women the name halmoni adds a level of kinship with and respect to them by the Korean people. 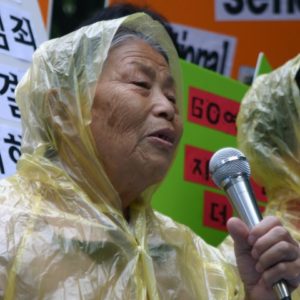 Hwang Kumju, a former comfort girl-woman, was born on August 15, 1922 (lunar calendar) in Buyeo, Chungcheongnamdo (Chungcheong South Province) . Her family, though not financially well-off, was an aristocratic family. Her father was educated in Japan after his high school in Seoul with the help of Hwang Kumju’s maternal uncle who ran a judicial scrivener’s office. Unfortunately, her father’s health declined toward the end of his studies and he had to come back to Korea. He was eventually bed-ridden and, at the age of thirteen, Hwang Kumju went to work as a housemaid to pay for her father’s medication. Despite her efforts, her father passed away after one year. At the age of seventeen, she was allowed to go to an evening school run by a church and she attended the school for two years. She then heard from a Japanese lady in the neighborhood that a person can make a lot of money working at a Japanese factory. She thought of it as a good opportunity to earn real money since she heard of a couple of others who had gone to Japanese factories and made good earnings, one of whom came back with a success story to tell. At the time, the Japanese head of the community was forcing each family to send one of their children to Japanese factories and Hwang Kumju volunteered to go as a representative of her foster family. Her foster mother was very appreciative of Hwang Kumju since her children did not have to go to Japanese factories. She promised Hwang Kumju that she would find her a good man and help her get married once she returned. Hwang Kumju was twenty (probably in Korean age) when she signed up to go to a Japanese factory.

There were nineteen others from the town who seemed to be around 15 or 16 years old. They were put in a train with thirty other girls/women. The windows were covered and there was no lights. They could not look outside and did not know where they were transported. They were given one rice ball and water twice a day. Before the train pulled out, she peeked outside and saw a soldier transferred a roll of papers to a military policeman who, in return, gave the soldier another set of papers. Something then hit her as she was watching them exchange papers and she recalls: “As I watched, my heart suddenly sank. This scene kept recurring in my mind for many years afterwards. I can still vividly remember it.” ( p. 72) They arrived in Jilin, China and were taken by a truck to a place with many barracks. Some of the women who had been there greeted Hwang Kumju and other girls with words, saying, “Poor things, you are dead now.” The girls asked them what job they were supposed to do and they responded, saying: “It is a job, but not a job in the ordinary sense. Just do what you are told. If you don’t you will be beaten to death.” (p. 73) The women told Hwang Kumju and the other girls after what happened the next day: “Do you see what we mean? We won’t be able to leave this place alive.” (p. 74) Hwang Kumju described the rape that happened the next day:

The next day, soldiers came and took us away one by one. I was taken to an officer. He was sitting near his bed and asked me to come over. He tried to hug me. I resisted, saying that I would do anything, cleaning, washing and so on. But he ignored me and tried to embrace me again. When I continued to resist he slapped me on the face. I begged him to leave me alone, but he told me to do as I was told, to which I replied I would rather die than oblige him. He grabbed my skirt and pulled it so hard that it was torn from the belt. . . . Left in my underwear, I knelt before him and pleaded with him to spare me. He grabbed me by my hair, pulled me up and ripped my underwear off with a knife. I was so shocked that I fainted. When I came round, some time later, he was sitting a few paces away from me wiping sweat from his brow. A soldier came in and took me away. I had to grab my underwear around me and wrap myself in my torn skirt. (pp. 73-74)

Rape by a soldier was  initiation to her inhumane life as a comfort girl-woman. She and others served about 30 to 40 soldiers a day during weekdays and even more during the weekends. “Hayaku! Hayaku! Or “Hurry! Hurry!” were the words you hear from outside of the room if any soldier took a tad longer. Japanese soldiers also suffered trauma from the war as evidenced by some soldiers Hwang Kumju witnessed sobbing during sexual encounters.

Hwang Kumju describes her life as a sex slave:

The comfort women in the military unit were not treated like human beings. We were beaten almost every day. If we looked at the moon, we were hit as the soldiers asked what we were thinking of. If we talked to ourselves they hit us again, saying we must be swearing at them. We were told to behave as if we didn’t see anything or hear anything. So we walked about with our hands covering our eyes. If we tried to take a walk outside the barracks we were kicked back inside. So we had no opportunity to look around at where we were. (p. 76)

She was forced to live as a mute, deaf and blind while experiencing life-threatening fear. Her words, after her trauma, express both regret and determination. Hwang Kumju says:

I left home thinking I was doing my duty as a faithful child. But that action ruined my life. From now on, I would like to live the rest of my days without being ignored by others. It is my wish to help poor people and eventually to die without being a burden on others. (p. 79)

Please go to www.knowcomfortw.com/cms/ to see the map which exhibits the route where she was taken from her home and back to Korea.

Acknowledgment: I would like to express my gratitude to the Korean Council for Justice and Remembrance for the Issues of Military Sexual Slavery by Japan for giving me permission to use a photo of Hwang Kumju halmoni. 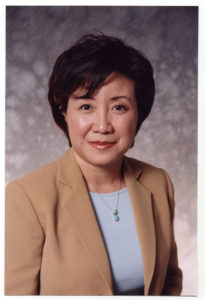 Angella Son is an Associate Professor of Psychology and Religion at Drew University.  She is an ordained Presbyterian minister and a fellow of the American Association of Pastoral Counselors.  Her publications include, Spirituality of Joy:  Moving Beyond Dread and Duty, 기쁨의 영성, and many book chapters and articles.  She served as the president of the Society for Pastoral Theology and on the editorial boards for several scholarly juried journals. She is a recipient of the Open Rank Research Grant, which is funded by the Templeton Foundation, from the Yale Center for Faith and Culture at Yale Divinity School.  She is invited as a preacher and speaker to churches and other various organizations.