This has been re-printed from a social media post by Drew’s Black Ministerial Caucus in 2016. 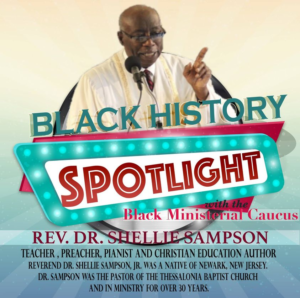 Rev. Dr. Shellie Sampson, a graduate of Drew Theological School earning both his Master of Divinity (’71) and Doctor of Ministry (’77).

Rev. Dr. Sampson was a true American hero who served God and mankind with unparalleled excellence. Rev. Sampson was born on December 15, 1940 in Newark, New Jersey. As the eldest of three children to the late Shellie Sampson and Lillian Brinson, he placed a high value on education and led a life characterized by profound spiritual insight, hard work, tenacity, and the relentless pursuit of excellence. While growing up in Newark, he took advantage of the opportunities before him and used his resources to become a man of distinction who would leave an enduring legacy.

Rev. Dr. Sampson graduated from Rutgers University earning a Bachelor’s of Arts in natural science. He worked diligently even while being one of few Black Americans to attend Rutgers. During a time of tumultuousness and racial upheaval, he persevered in spite of discrimination from professors and hostility towards African Americans. Following his bachelor’s degree, assured of the unquestionable spiritual call upon his life, he attended Drew University where he earned a Master’s of Divinity and a Doctorate in Ministry of Christian Education.

At the same time that he was yielding to the spiritual call, there was an equally great intellectual fervor continuing to grow within him. He was accepted to New York University where he pursued Urban Studies and all coursework leading to a doctorate degree. After the program had been eliminated, he transferred to Temple University where he gained far beyond what he imagined. Choosing to start from the beginning of his doctorate, he was able to study the latest research that would provide him with the tools he needed to produce his own original, cutting-work. Dr. Sampson gained mastery in areas beyond his particular discipline, integrating Urban Studies, Psychology, Black Studies, History, Sociology, and Education. In 2007, at 66 years old he had completed coursework for his third doctorate and earned a Ph.D. in Urban Education and Psychology. Within the University, some of the most highly esteemed scholars commented that they were astounded by the depth of his intellectual contributions to fields that were not his own. His departments began his dissertation as the model for all subsequent doctoral theses and asked him to provide a list of every title in his personal library at home. Based on his inquiries and insights, additional courses were added to the curriculum to further enhance the program. These accolades were in addition to seminars he attended at MIT and Princeton University.

In the 1970s, Dr. Sampson was ordained and installed on the same day as Pastor of New Calvary Baptist Church in Montclair, New Jersey. Despite the arduous schedule, he worked, attended school, and pastored with his whole heart. While pastoring at New Calvary, he was invited to apply to serve as the interim headmaster at Covent Avenue Science Academy. He assumed the position and the Lord would continue to open doors for him, connecting him with various leaders who would recognize his gifting and invite him into more extensive church networks. Dr. Sampson served as the president of both the Shiloh Baptist Association Congress of New Jersey, as well as the Northern Baptist School of Religion of Newark. He was a guest instructor for the Eastern Baptist Association College Seminary Extension; a guest lecturer at Drew University School of Theology, and Executive Director of the Baptist Education Center of New York. In addition, he traveled with the NYC Religious Education Academic Foreign Studies Tours, traveling to WCC Geneva, Switzerland, Gregorian University, Rome and Hebrew University, and Israel.

After pastoring from 1970 to 1982 at New Calvary Baptist Church, he was called to Thessalonia Baptist Church and installed as the twelfth pastor in May, 1982. Dr. Sampson came with a vision that continues to grow even unto this day. His vision included major projects such as the erection of the Cultural Community Center, which today is a multimillion- dollar communal faculty. Upon completion, the Center housed the following: South Bronx Leadership High School, the TIR Bookstore, church offices, a banquet hall, amphitheater, chapel, lower gallery with additional office space and over a dozen classrooms. Dr. Sampson was a strategic thinker who anticipated the future. In laying the plans for the building, he placed the elevator and handicap ramp at the intersection of the church and the new construction in order to provide access for seniors and disabled visitors. Dr. Sampson’s strategic leadership led him to establish the Thessalonia Institute of Religion and the Thessalonia Academy, an elementary school designed to ground students in the Gospel and provide a rigorous academic curriculum. To date, the Academy has had over 50 graduates and more than 100 students, many of whom have gone on to attend prestigious boarding schools, colleges, and universities. Other endeavors include several renovations to the church building, food pantry, senior programs, adult education programs, feeding and clothing of the needy, Boy Scouts, youth ministry, annual church retreats, and the enhancement to the name: Thessalonia Worship Center.

In addition, writing was the hallmark of Dr. Sampson’s life. Not only could he often be found feverishly inscribing notes in a pocket notebook, but he always carried a pen and was ready to record the things that God was revealing to him. His discipline to write transferred to his roles in ministry. He was Editor-in-Chief for the National Baptist Christian Education Handbook and he wrote materials for church leadership, such as Effective Techniques in Abuse Ministry: Handbook for youth education, Superior Leadership in Challenging Situations as well as training guides for various aspects of the ministry. He authored several books and publications, including Revelation Now: Viewing the Tragedies and Triumphs of Believers, Building Faith Now and Achievement. His publications extended beyond local venues and were disseminated to international audiences. He incorporated his own publishing company, Dorkeo Inc and his texts were distributed through a variety of formats including print, digital, audio, and visual.

He tenaciously pursued his purpose until January 20, 2014 when the Lord called him home.