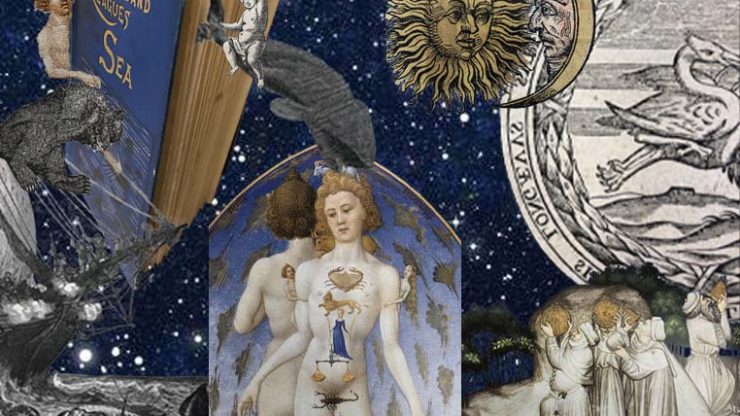 Drew University’s Special Collections department is comprised of a number of rare book collections, which are all part of the Julia E. Baker Rare Book Collection.

“When it became clear that one of the Drew Library’s main needs was provision for the preservation of older materials and systematic organization of our older valuable books, it was Julia’s conscientiousness as well as her love of the old printing and fine bindings that led her to present a program for preservation, to investigate personally the practices of the Library of Congress,…and to become herself a rare book librarian.”
–Art Jones, Director Emeritus, Drew University Library, Memorial Speech for Julia E. Baker

Julia E. Baker (1913-1987) arrived at Drew University in 1954 as Catalog Librarian. She was responsible for seeing the need to separate the rare and valuable materials from the circulating collection and to create the McClintock Collection, named after Drew Theological Seminary’s first president. In 1975, she was named the McClintock Collection Librarian and worked with the rare materials held in the library until her retirement in 1978.

The scope and range of what constitutes a rare book is as vast as the materials contained in the Baker Rare Book Collection. The collection contains the oldest and most valuable books in the Drew University Library, but also newer books that have been signed by authors or famous owners.

The Julia E. Baker Rare Book Collection is partially cataloged and some items may be unavailable for research. For more information, please contact speccol@drew.edu. Local New Jerseyan Robert Campbell, Jr. (1917-1999) built a collection of mainly eighteenth century books, focusing on first editions. Though some of his books fall outside the eighteenth century, they illustrate his passions as a reader and collector. Most of the books that Campbell collected are bound in splendid collector’s bindings, which showcase the beauty of the works they contain.

The collection contains just over 100 volumes, which enrich Drew’s literary holdings. Notably, the Campbell Collection contains a second edition of Johnson’s Dictionary, a first edition of An Elegy Wrote in a Country Courtyard (1751), and an eighteenth century reprint of Boccaccio’s Il Decamerone. Campbell also owned several first editions from author Lord Byron, and multiple copies of works by Robert Burns.

The Campbell Collection is part of Julia E. Baker Rare Book Collection and can be searched using the online catalog Glen Sergeon (1949-2013) was born in Vauxhall, N.J. and graduated from the College of Liberal Arts at Drew University in 1972. While at Drew, Sergeon participated in the London and Washington semesters, and became president of Hyera, the black student association. He attended the London School of Economics and received a Master in Public Policy degree from the University of Wisconsin. A successful businessman and philanthropist, he spent nearly fifteen years in various roles at Citicorp, before joining Merrill Lynch Investment Managers. He held board positions at Phipps House, The Spence School and New York State Teachers’ Retirement System.

The Glen Sergeon Collection of African American literature comprises 75 volumes in a range of genres by leading black writers of the 20th century. Major figures of the Harlem Renaissance include Countee Cullen, Langston Hughes, Zora Neale Hurston, Claude McKay, Ethel Waters and Richard Wright. Among the many novelists and poets represented are James Baldwin, Ralph Ellison, Paule Marshall, James Alan McPherson, Ishmael Reed, Sapphire, Derek Walcott, Charles Wright and Al Young, often with signed copies of their works. There are memoirs, biographies, interviews, anthologies of black writers (some signed by their contributors), and studies of black culture. The collection also includes nearly thirty works of fiction and non-fiction (with uncorrected proofs for four novels) by John Alfred Williams, who became a personal friend of Sergeon, as did poet Lucille Clifton. Twenty-nine volumes are inscribed to Burt Britton, co-founder of Books & Company in Manhattan, and collector of self-portraits by authors, artists, actors and musicians.

View the finding aid of the books in the Sergeon Collection

The Sergeon Collection is part of Julia E. Baker Rare Book Collection and can be searched using the online catalog. The Norman B. Tomlinson Collection

Byron
The twenty-four titles by Byron (1788-1824), all of them first editions, were printed between 1807 and 1823, and include virtually every major work by the author. The collection is particularly rich in association copies: Beppo and The Prisoner of Chillon, with bookplate of Francis Lewis Randolph; Thomas Moore’s copy of Sardanapalus, with his signature on the front fly-leaf; The Corsair, with a letter from Moore to Byron, dated February 18, 1816, tipped in at front; and Cantos I-II of Childe Harold’s Pilgrimage, with an autograph note, signed, from Byron to John Murray. In addition, Hebrew Melodies was bound by Zaehnsdorf, and The Giaour by Sangorski & Sutcliffe. Hours of Idleness is in original boards, and The Prisoner of Chillon and Mazeppa in original wrappers.

Churchill
Tomlinson collected many of Churchill’s writings: his speeches and historical works, his essays on painting, and his poetry. The 24 titles include The Second World War, War Speeches, My Early Life, and Painting as a Pastime. These important works show Churchill’s intellectual life as well as his life as an author.

Ruskin
John Ruskin (1819-1900) was a writer, social thinker, art critic, artist and philanthropist. He wrote on many subjects, including literature, education, architecture, myth, ornithology, botany, and politics. His forms of writing were as varied as his subjects, including essays, treatises, poetry, lectures, travel guides, and even a fairy tale. His writing emphasizes the connections between art, nature and society. Drew University Library holds a complete 39-volume limited edition of The Works of Ruskin by the Ballatyne Press, published in 1912, along with additional Ruskin volumes.

Whitman
Among the twenty-three volumes of Walt Whitman (1819-1892) are eleven separate editions or printings of Leaves of Grass, including the first edition, first issue of 1855; the Doheny copy of Good-bye My Fancy; and five presentation copies, including Good-bye My Fancy to John H. Johnston, Leaves of Grass (1860) to Henry P, Leland and Memoranda During the War to “each conductor and driver on the Camden horse-cars.” A number of volumes are signed or initialed by Whitman.

The Tomlinson Collection is part of Julia E. Baker Rare Book Collection and can be searched using the online catalog.