from the University Archives

A school’s colors are an important part of its identity.  They are a source of pride and something a group can rally around.  Drew is fortunate to have several records in the University Archives that document the evolution of this identity.  Interestingly enough, both sets of records correspond with new beginnings at Drew.

Brothers College, now the College of Liberal Arts, opened in 1928. Scarcely one year later, the undergraduates sought to distinguish themselves from the seminary.  They petitioned then President Brown to change the colors from the traditional blue and green to kelly green and gold.  Their petition, shown here, still has swatches of cloth attached to it.  The undergraduates had also done their homework, gathering statistics on other colleges and their colors.  Thirty students signed the petition; someone added a small but weighty note “Those who have not signed have given their consent orally.  Therefore, 100% of Brothers College are in favor of the change.” The petition had the air of a fait accompli. 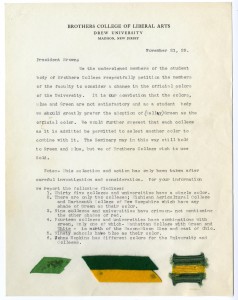 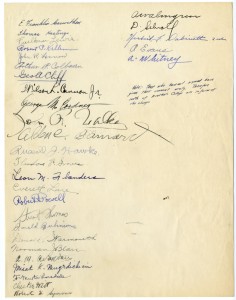 No copy of Brown’s reply to the students exists in the University Archives, but one can find other evidence that the petition was a success.  A 1935 copy of a pamphlet Drew Songs and Cheers contains music and lyrics for “Alma Mater Drew” written by John E. Barclay, in 1935.  Here are the last two lines of the first stanza:

Thy colors worn and battle-stained
On high we’ll always hold.
All hail Drew University;
All hail the green and gold.

The archives also preserves several green beanies, each with a gold “D” sewn onto the front, that were part of a student’s experience during their first year in the co Green and gold appeared to hold sway until sometime in the 1960s.  The change probably began in 1961 at the beginning of President Oxnam’s tenure. Oxnam asked a college art major and then seminarian Larry E. Kalp to write to Oxford University and ask: What do Oxford blue and Lincoln green look like?  Kalp received a reply, shown here, which – surprise, surprise – also has an attachment, a ribbon of Oxford blue used to attach wax seals to documents.

It would appear that this renewed interest in accurate colors brought green and blue back from a dormant period.  Even Barclay’s 1935 alma mater was at some point altered to fit the new paradigm.  The song was sung at Fall Commencement in 1989, but the lyrics had changed:

Thy colors ever glorious
Still wave on high so true;
All hail to Drew forevermore,
all hail the green and blue

This is what is still sung today at Commencement.

But older alums will have none of that.  Colors matter.  Every year at homecoming, this office receives a request for the original “Alma Mater Drew.”  When it is time for students who were here 50 years ago to remember their days at Drew in song, once again they are indeed so bold to rally round the green and gold.