Back in your Forest days, your life was undoubtedly touched by the friends, teammates and classmates with whom you shared those years. As the years pass, we make choices, go places, embark on a path that began at Drew. Each year, Drew’s alumni body recognizes outstanding achievements—whether to the University or to society at large. Learn more about specific alumni awards, and nominate a fellow alumnus/a. 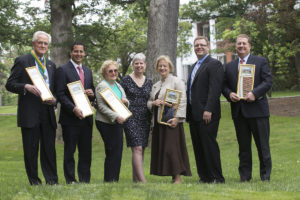 Each year during Reunion, the College Alumni Association honors those alumni who have made significant contributions in their fields of expertise and to society at large. While there is a preference to issue awards to alumni celebrating a milestone reunion, we want to know about any Drew alumni who excel in their field or are making an impact in others’ lives!

Because the University recognizes that we have many friends who also contribute to the mission and work of the College of Liberal Arts, in 2021, the CAA added a new “Friend of Drew” award category.

The Achievement in the Arts Award recognizes alumni who demonstrate exceptional and sustained success in the field of art, music and/or theater; exhibit outstanding character and loyalty to Drew; and personify the basic ideals of the University.

The Achievement in Business Award recognizes alumni who have demonstrated exceptional and sustained success in the field of business, outstanding character and loyalty to Drew, and personified the basic ideals of the University.

The Frances B. Sellers Award honors alumni who personify the ideals of the Frances B. Sellers Program (formerly Educational Opportunity Scholars (“EOS”) program) and who have contributed significantly to their community. The award is in recognition and memory of the late director of the EOS program who promoted and exemplified values of service to the success of our urban youth.

The Achievement in the Liberal Arts Award recognizes alumni who, through exceptional and sustained success in their chosen careers, outstanding character and loyalty to Drew, have demonstrated the efficacy of a liberal arts education.

The Achievement in the Sciences Award recognizes alumni who, through exceptional and sustained success in the field of natural or quantitative sciences, outstanding character and loyalty to Drew, have most personified the basic ideals of the University.

The Service Award recognizes alumni of outstanding character who have demonstrated exceptional and sustained loyalty to Drew by making significant contributions to furthering the University’s mission and goals.

The Community Volunteer Award recognizes alumni who have made significant contributions to their community, state or nation as a volunteer and have demonstrated outstanding character, loyalty to Drew.

The Young Alumni Award recognizes alumni who graduated from the College within the past ten years, and have demonstrated exceptional success in their chosen field, outstanding character, and/or loyalty to Drew.

The Friend of Drew Award is given by the Drew University College Alumni Association Board of Directors for exemplary and sustained service to the University and in recognition of loyal and active support for the mission of the University by a member of the greater Drew Community.

The Theological School Distinguished Service Award recognizes unique or exemplary leadership in the church or particular extension ministry; honors those whose service to the community and/or world is noteworthy; and to acknowledges Drew Theological School as the foundational preparation for the individual’s leadership and service.

The Athletics Hall of Fame recognizes and honors individuals who have made outstanding contributions to Drew Athletics and have brought distinction to Drew University and its athletic programs. New members are inducted into the Hall of Fame each year.

An alumnus/a is eligible if he or she participated in two full seasons of a varsity intercollegiate sport, was an exceptional athlete, and made outstanding contributions to Drew Athletics.

Alumni become eligible for induction at ten years after graduation from Drew University. A coach or other staff member who has offered extraordinary service to Drew Athletics becomes eligible five years after concluding employment.

Nominations may be submitted by any member of the Drew community and must be received by December 1 for the nominee to be considered for induction the following fall.  The Hall of Fame Committee, comprised of former Drew athletes, previous Hall of Fame inductees, members of the Drew University Athletics Department and staff from the Office of University Advancement, reviews nominations and selects each year’s slate of honorees.