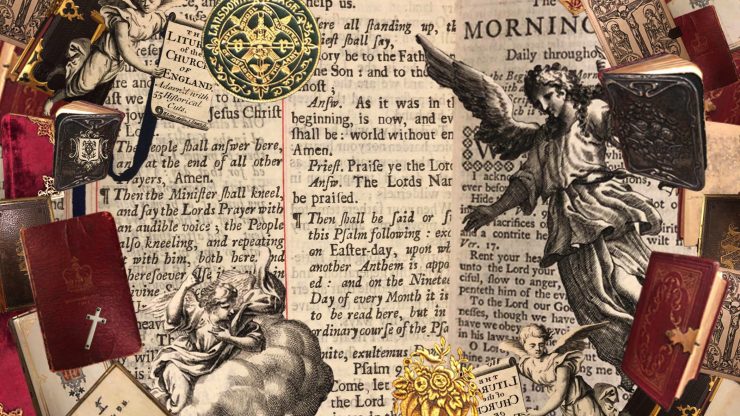 Drew University Library houses an important collection of Anglican prayer books, thanks to two generous donors. In 1978, Frederick E. Maser gave the Library his collection of 152 prayer books, to which he has since added more than 50 titles. In 1996, John Prinster presented Drew with a complementary collection of nearly 70 volumes, as well as two dozen related historical and ecclesiastical works. These 300 or so titles, printed between 1522 and 1986, in turn complement Drew’s sizable holdings in prayer book history and criticism. Moreover, many of the prayer books in each collection are bound with Bibles and psalters that are of considerable bibliographical, genealogical, and historical interest in their own right.

The Maser and Prinster collections are particularly rich in early-printed editions of the Book of Common Prayer. The earliest-printed work, Franz Birckman’s Psalter, printed in Paris in 1522, is apparently unique in America. Perhaps the jewel of the collection is the editio princeps of the Book of Common Prayer, printed in London by Edward Whitchurch in March, 1549, during the reign of Edward VI. Significant also are John Daye’s London, 1578 printing of A Booke of Christian Prayers, with a full-page woodcut showing Elizabeth I at prayer, bound by Zaehnsdorf, and the first edition (1637) of the Scottish prayer book, known as “Laud’s Liturgy”.

Both the Maser and Prinster collections are rich in examples of fine bindings, as well as fine printing and engraving. Works of binders Samuel Mearne, Moore of Cambridge, and Zaehnsdorf and Bedford are represented, as well as armorial bindings for Charles I, Charles II, William III, and Queen Anne. Several of the Victorian prayer books have covers of ivory, velvet, copper, silver, or petit point. There are fifteen copies of three editions (1760, 1761, and 1762) of the prayer book by England’s master typefounder and printer, John Baskerville. The American typographer Daniel Berkeley Updike is represented by several printings of the prayer book, including a 1930 edition prepared at the Merrymount Press on handmade paper. A number of works have illustrations by the prayer book’s foremost engraver, John Sturt. There is one fore-edge painting, showing Worcester Cathedral, on a 1678 French edition.

See the catalog from the exhibit “Comfortable Words: Anglican Piety and The Book of Common Prayer” curated by Kenneth E. Rowe